Zuppa Toscana made low carb! My family had NO IDEA that I swapped the potatoes for sliced turnips – they take on all the flavors of the soup and the texture is just like a potato! This low carb soup recipe will be a total hit with the whole family.

Would you believe that I was an adult the first time I ever ate at an Olive Garden? Why in the world did my parents shield me from the deliciousness when I was a kid?!

Believe it or not, I still eat there every now and then. I usually go for a salad and chicken Alfredo – I just ask them to replace the pasta with steamed broccoli and they’re happy to accommodate!

I totally miss the Olive Garden Zuppa Toscana recipe though. It’s one of my favorite soups to eat at a restaurant. Unfortunately, it’s loaded with carbs thanks to the flour they use as a thickener and the thin slices of potatoes.

This zuppa toscana copycat will satisfy any craving though. 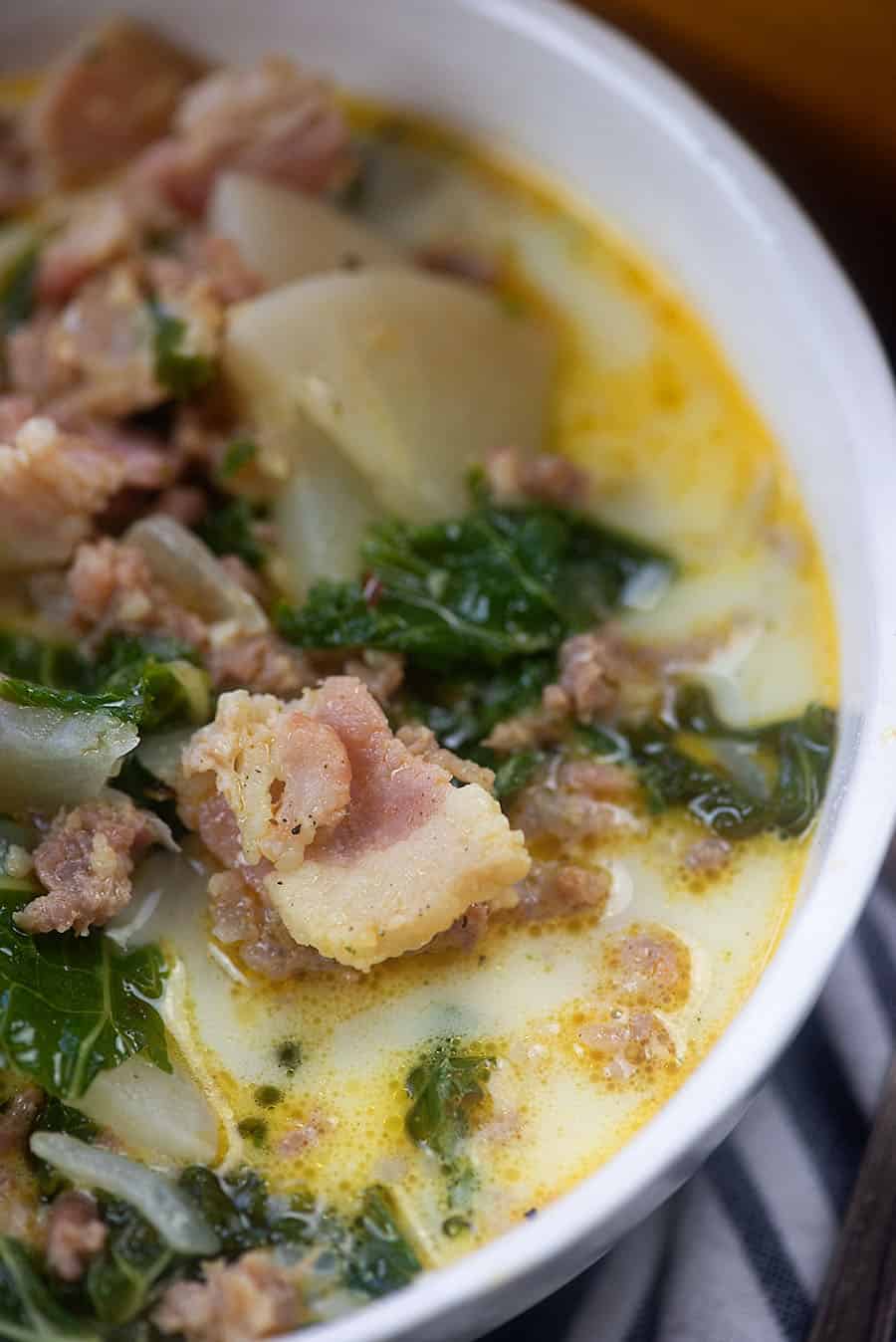 I served this to my family and they had NO IDEA they were eating turnips instead of potatoes. I call that a win.

I hope you guys give this zuppa toscana with turnips a try and let me know what you think. 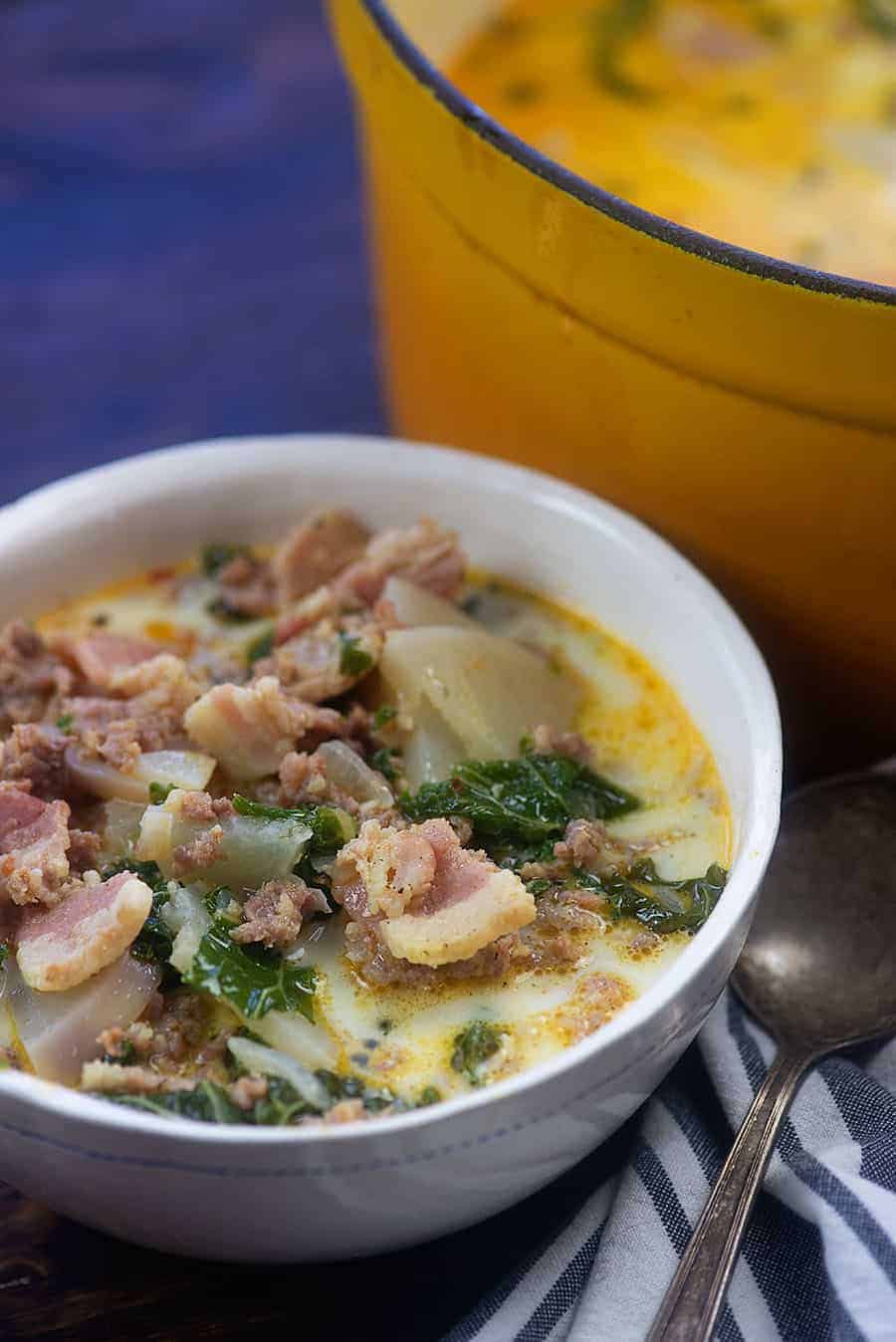 How to make this Zuppa Toscana recipe:

First up, we’re going to brown some Italian sausage. I like to use a spicy variety, but you can use mild if you prefer. If you do use mild, I’d recommend just adding in a little sprinkle of red pepper flakes. That way you get the traditional heat, but you can control how much. 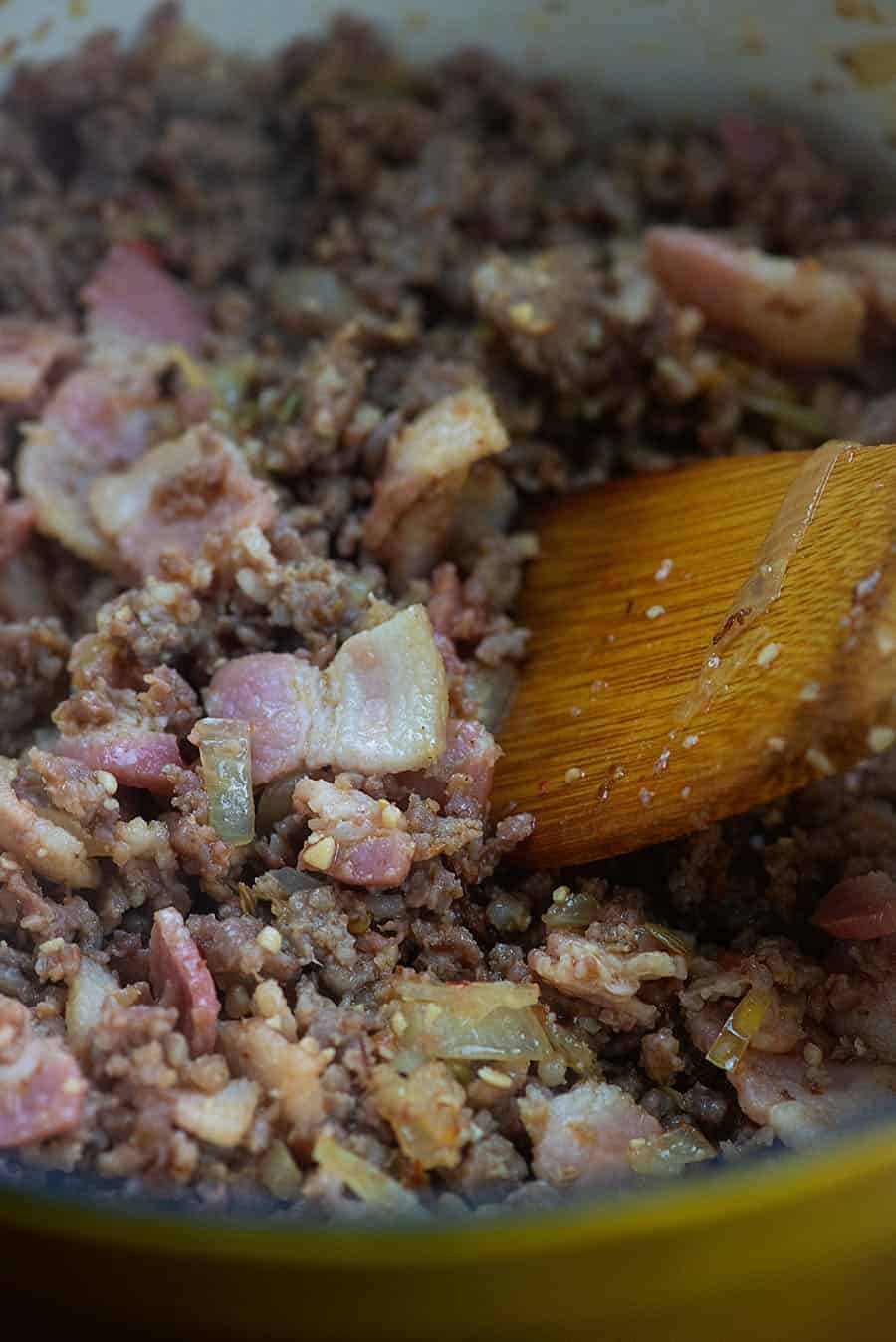 Once your sausage is beginning to brown, stir in some chopped raw bacon, diced onion and minced garlic and cook those up.

The bacon won’t get crispy, but it will cook through as we finish off the soup. It adds a great flavor!

Next comes your chicken broth and turnips. Bring that to a boil, reduce to a simmer, and cook for about 10 minutes.

Add in the kale and let that cook for about 5 minutes. The kale and turnips should be nice and tender. 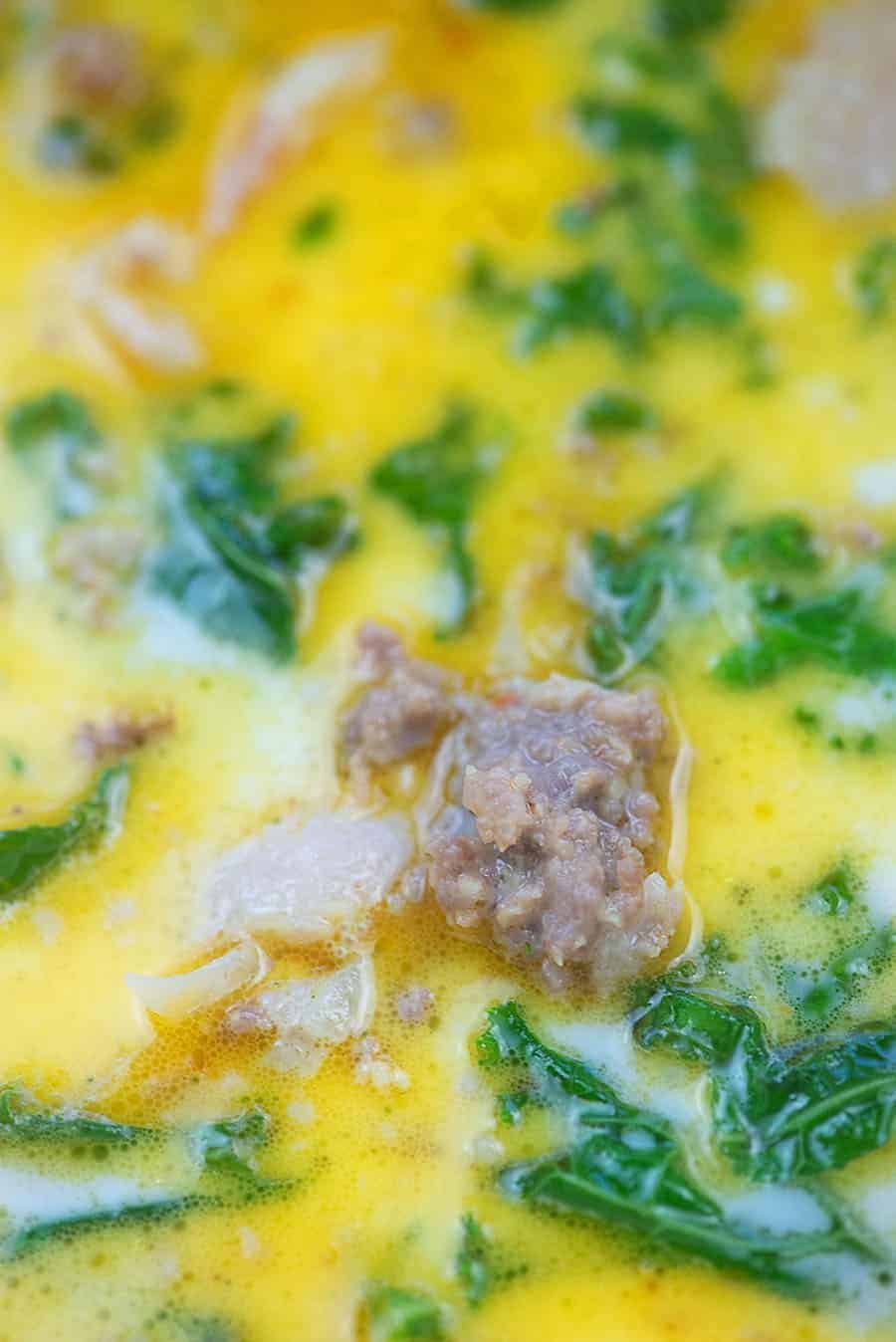 Remove from the heat and stir in the cream.

Isn’t it so pretty and colorful?

That’s it, friends! This zuppa toscana recipe is ready to devour! 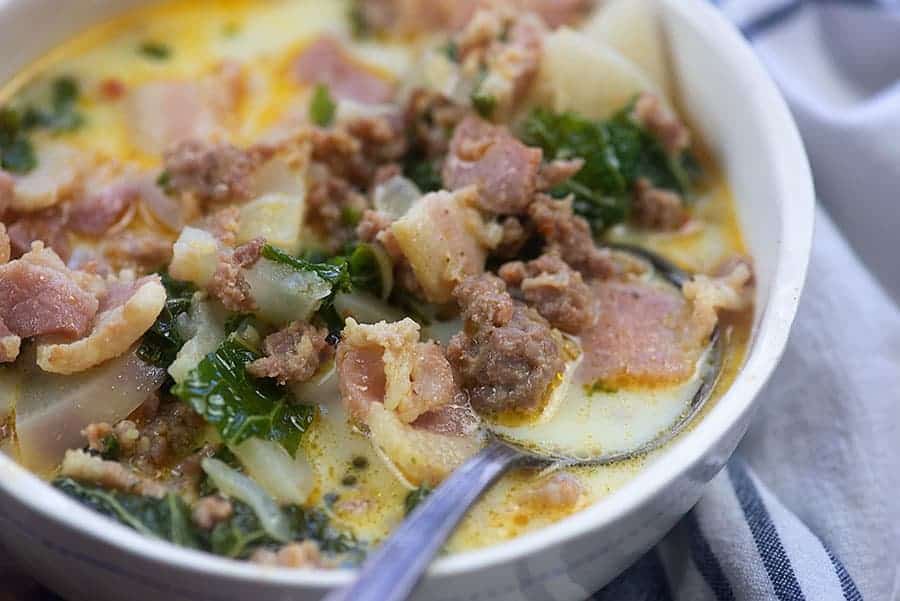 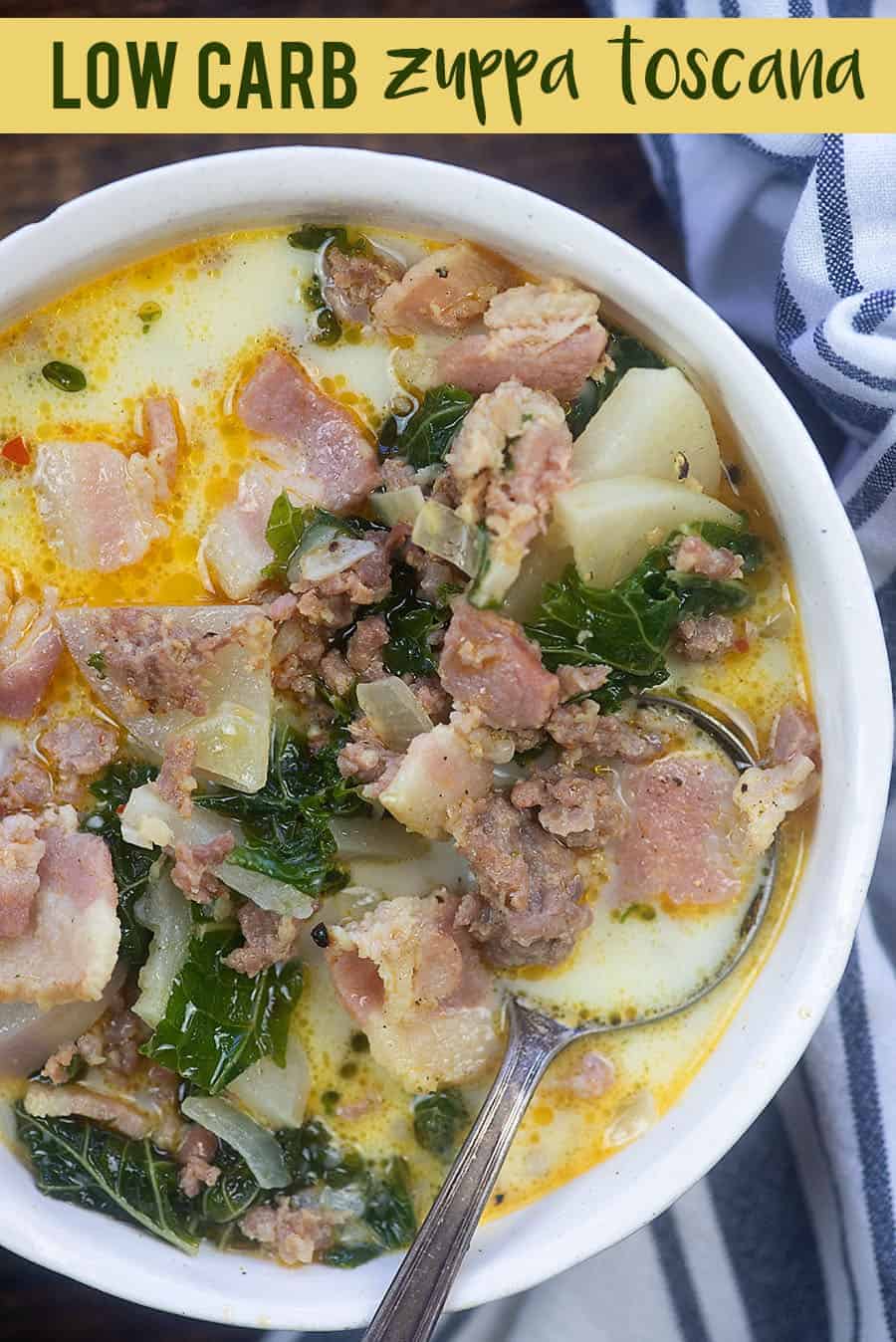 You may use spinach in place of kale if you prefer.

As an Amazon Associate and member of other affiliate programs, I earn from qualifying purchases.